Posted on 2014 January 28 by gaikokumaniakku

“You know in the twenties Magicians still had style. Turbans, tuxedos and tarts in tiaras. Smashing times. Now it’s all Sigils, stubble and self abuse.”
-Alan Moore, probably making fun of Grant Morrison

[Moore saw himself as similar to the Golden Dawn occultists of the 1920s, and Morrison’s style is notorious for its use of sigils.] 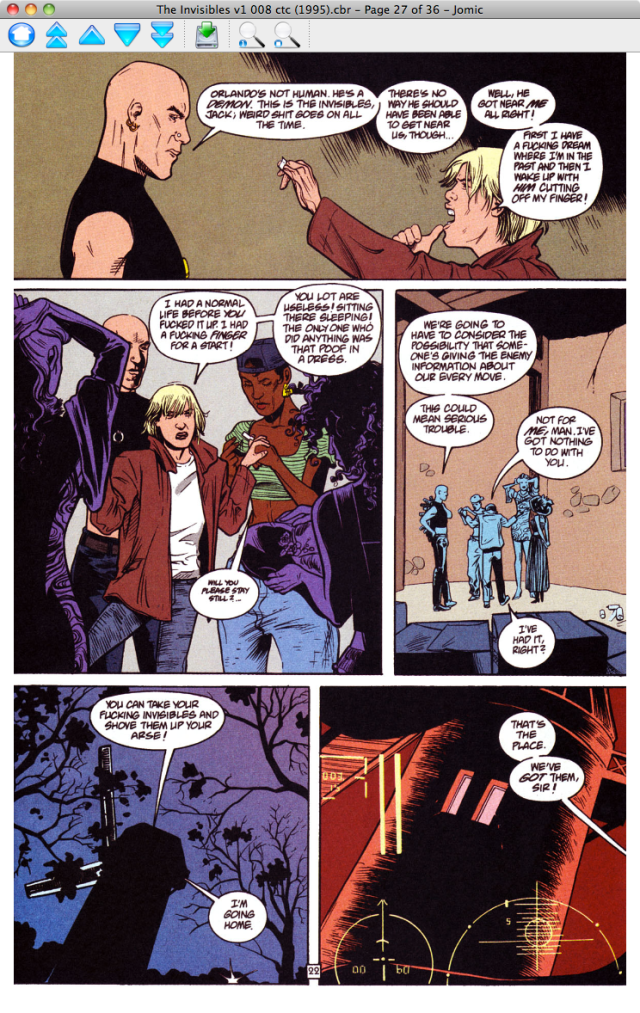 Grant Morrison’s The Invisibles starts out rather strongly, but quickly becomes self-indulgent.

It starts off with a working-class, blond Cockney boy – kind of like a young John Constantine with longer hair. 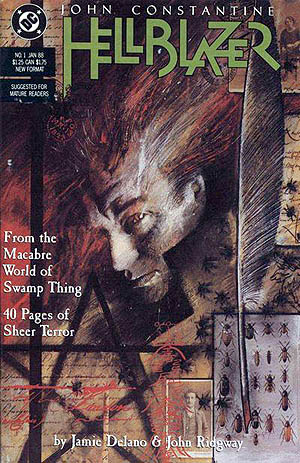 It quickly takes a nose-dive into sheer Crowleyanity. All the same, it might end up as a decent work of fiction. I will reserve final judgement until I finish it in its entirety. I will actually probably bother to read it in its entirety, which is more than I can say for Hellblazer. Both of these stories struck me as stupidly left-wing, but Hellblazer seemed to aspire to a spiritual interpretation of left-wing humanism, whereas The Invisibles seems to aspire to a sensual, materialistic interpretation. I suspect The Invisibles will present a view of the occult which will impress me more than Sandman, Kid Eternity and Hellblazer did.

I should warn my readers that The Invisibles glorifies non-marital, non-hetero sex. My objections to that are not serious enough to prevent me from reading the story. I think in the end, it will turn out to be sadly limited by its emphasis on sensual hedonism.

Sensual hedonism, in some ways, is its own punishment. Sometimes a sexual libertine pushes his pursuit of pleasure as far as it can go, decides it’s not enough, and turns to spirituality.

But sometimes a hedonist pushes it as far as it can go, and can’t find spiritual redemption. Sometimes hedonists just fall into nihilistic despair. Example:

Modern “Hermetic” magic is perhaps not very worthy of the title “Hermetic” – that is to say, perhaps it owes far more to the imagination of W. B. Yeats than to any spiritual connection to Hermes Trismegistus. Say what you like about W. B. Yeats’ level of spiritual attainment, at least he was not limited to sensual hedonism. Many self-proclaimed modern magicians are just sex addicts with pentagrams on their business cards.

If you want to read what an actual ceremonial magician of the 1920s considered to be “magic,” you can read the fiction of Dion Fortune – books like The Sea Priestess, The Secrets of Dr. Taverner, The Goat Foot God, etc. Those are stories about people – some of them mystical poets, others just plain folks – who try to get deep into their own identities. There’s very little “psychic” or “paranormal” stuff –
it’s almost as mundane as Pirsig’s Zen in the Art of Motorcycle Maintenance.

When you write autobiography, you have an opportunity to be honest and say, “I don’t face any dangers more dramatic than the risk of car accidents. I don’t put forth any effort more heroic than paying my rent. The only exciting thing that’s happened to me is that I managed to get rich – call it destiny, positive thinking, magic, or coincidence – I got rich enough to have the spare time to write this book.” Autobiography can be tinged by self-flattery, but it can’t stray too far into wish-fulfillment.

That kind of honesty is powerful, but I don’t see much of it in Moore or Morrison. Their characters face melodramatic dangers, make personal sacrifices, witness earth-shattering powers, etc. It can start with wish-fulfillment and get crazier as it goes.

The “hermetic magic” scene of the 1980s was very different than the 1920s. In the 1920s, rare books were expensive and hard to find. By the 1980s, there was a very different sort of mass media apparatus that wanted to print and sell any kind of text that could be labeled as “ceremonial magic.” 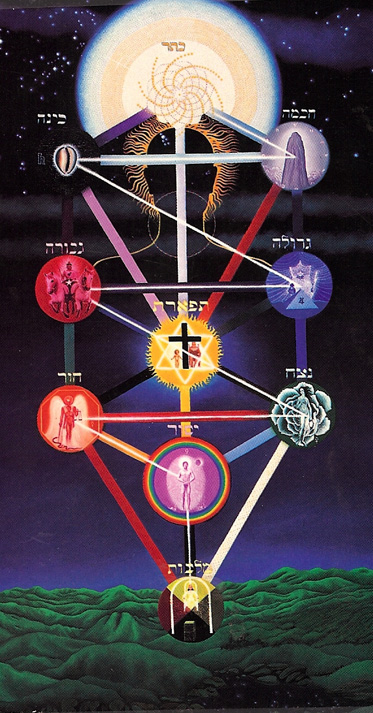 So whereas a magician of Dion Fortune’s class and generation would have often come into a lot of unexpected money by inheriting it from a forgotten relative, a magician of the 1980s would sometimes make a lot of money by getting a lucrative contract with mass-media plutocrat. This obviously motivated a lot of artists to write books with magic as a theme, but entirely crafted to please plutocrats. Thus the 1980s produced a lot of bad fiction and nonfiction that alludes to magic as a marketing gimmick, not because the creator had tried to do any magical work.

The “hermetic magic” scene of the 1980s was often stupid, because magic is a topic that requires principled commitment, and pandering to audiences requires an absolute lack of principles. The corresponding scene of the 1990s was evidently stupider, and Morrison’s works were part of this attempt to gain the approval of mass-media gatekeepers and the money of mass-media audiences. However, I cannot deny that Morrison tried to do some magical work, and was responsible for turning his notions of magic into some decent art.

Various people call themselves “Hermetic occultists” and claim that they are doing magic. In the end, it seems that many of them accomplish nothing but the application of their willpower to efforts in the fine arts.

When W. B. Yeats put his will into becoming an artistic genius, he succeeded. When modern “magicians” try the same, they often seem to fall short of genius. Jack Parsons is often described as a magical scientist, but his primary achievement was being in his lab when it blew up – probably by accident, possibly by malice.

“Magic” is sometimes described as a “science of will.” Alan Moore and Grant Morrison probably describe themselves as magicians, and they are undoubtedly popular and commercially successful artists. And yet, many “magicians” are only fine artists. One does not see many successful engineers who attribute their engineering prowess to magic. If magic is really a science of will, there ought to be more engineers, financiers, privateers, and musketeers who attribute their success to magic.

Image from the Grimoirum Verum.

I think the typical man in the street sees a field of study as characterized by its results. If physics can produce atom bombs and also really boring, useless lectures, physics on the whole is an impressive discipline. But if your uncle, the physicist, can’t make atom bombs, physics doesn’t make your uncle cool – he’s just another guy who can give boring lectures, and lots of disciplines can do that. If the only goal is to produce boring lectures, one might as well study whatever field seems easiest – Art History, perhaps, or Business Communication. 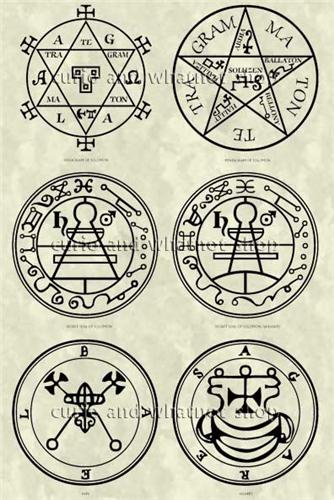 Image from the Lemegeton.

Similarly, if ceremonial magic, or chaos magic, or “magick with a k” can only psyche up magicians to produce works of fine art – well, it’s just another way of psyching oneself up. They could have chosen to just buckle down and make their art-work right away. They could have chosen to believe in an imaginary friend called Mr. Tickles the Tipsy Teddy-bear who comes to them in dreams and gives them ideas for art-works.

All the pictures and symbols and myths of the Renaissance Hermetics are all very stimulating, especially if you live in a world filled with grumpy materialists. Compare the aesthetic impact of the conventional medieval-grimoire symbols from the Grimoirum Verum and the Lemegeton, shown above, to the symbols of Giordano Bruno, below. 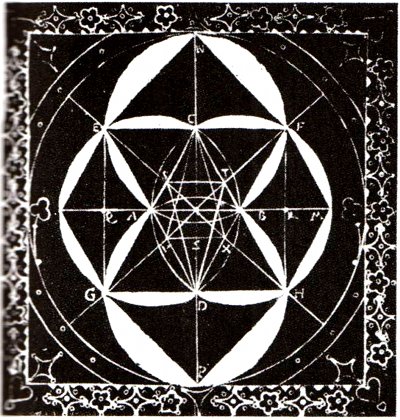 In my arrogant opinion, the medieval grimoires are stimulating – which is why people keep imitating them in various fictional works – but the Renaissance forms are the kind of thing that you could put in a museum and command art students to go and study. 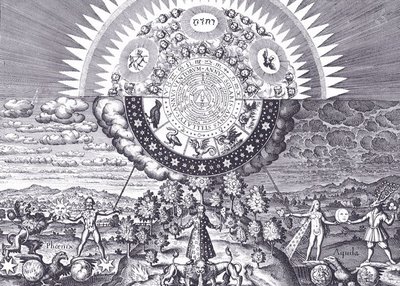 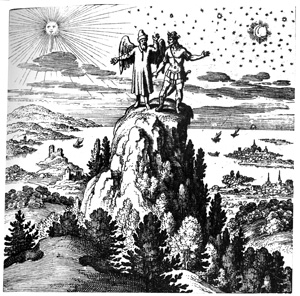 What might be more productive would be to argue that we can document specific points in magical practices, and show how they influenced the ideas of later thinkers. We can write histories of magic – and we probably should, considering some of the folks who took an interest in it: 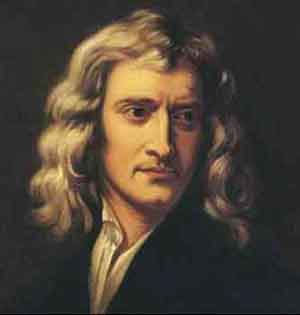 Comments May Send You Extra Unwanted Notifications. Please do not check the "notify" box if you have limited inbox space. We are trying to fix this. Cancel reply