Not since Onegai Twins has there been such an unbelievable premise.

Anime blogging does not make a lot of money, even for the people who spend years on it. Most anime bloggers are never going to see a red cent.

But this anime would have us believe that a Japanese man can make a sufficient income to support a wife from anime blogging. That’s slightly more believable than Onegai Twins, which had a genius teenage boy who could make enough money from computer programming at home to support two teenaged girls. 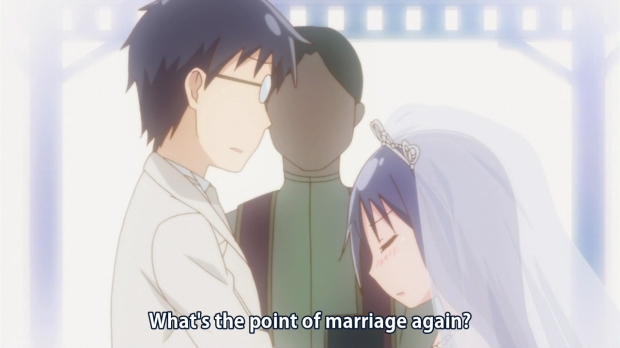 This is a crowd-pleasing show. Each episode is 3.5 minutes of cutesy sexual tension between newlyweds. The psychological factors are fairly believable; the wife’s reactions to her husband’s raging libido are reasonable. Their ages are not specified, but the blogger is two years younger than his wife, which implies that she initially chased hotter guys, but couldn’t get anyone else to commit. The wife seems to enjoy sex guiltily, and seems to relish her capacity to arouse her husband, but has a typically Japanese approach to respectability. The psychological interplay between a woman who feels the need to pretend to resist sexual advances and a husband who is entirely willing to overcome her show of resistance, over and over again, will probably make this show popular with committed couples.

A more realistic premise might be a woman who is tired of sex, not attracted to her husband, and resentful that her husband insists on having sex. However, that would be a lot less cute, and fewer people would watch it.